For the past few months, we are always hearing about the primary elections. With the democratic party currently searching for its identity and in the process of deciding its future, this election is sure to be one with lots of discussions on essentially, the destiny of our democracy. Looking at Wednesday’s Democratic debate, there are few tell-tale takeaways.

1) Far-left, moderates, everyone in between want to be the new face of the Democrats 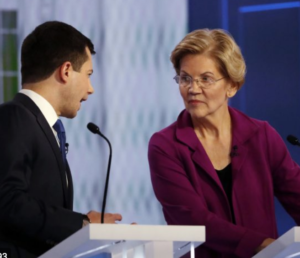 Right now, the biggest question within the democratic party is about how far left they want to go with their policies. From the very first debate this has been a recurring theme – does the party undergo a complete reformation in hopes of inspiring their base to take more action, or, do they take a moderate and unifying approach to appeal to more conservative voters? For example, one of the first back and forths of the debate was between Senator Warren and Senator Booker who discussed the wealth tax on billionaires vs. just taxation in looking at income and corporate gains taxes. This same type of conversation recurred when Pete Buttigieg and Senators Warren and Sanders launched in the age-old question of healthcare. Mayor Pete is advocating for Medicare for All Who Want It whereas the other two are concentrating on complete Medicare for All. Even Vice President Biden chimed in trying to say that his plan of building on Obamacare will solve the problem without needing the 30-40 trillion dollars. This debate solidified these divisions as the American people are now left to decide the direction they want to steer the country in.

2) American eyes are on the general election

One thing that became particularly clear is that the candidates, but moreover, the American people are already looking towards the general election. Last  Wednesday, each candidate took a different strategy in trying to show how they could beat Trump. Senator Klobuchar tried to make the argument that her moderate view of the United States’ future means that she could “go toe-to-toe” with Trump. Many other candidates like Senator Harris called for the rebuilding of the Obama coalition whereas Vice President Biden made the argument that he was, in fact, part of the Obama Coalition. In the debate, there were more attacks on Trump than on any of the actual candidates. All of this points to the fact that more than anything, candidates are looking to show their ability to face Trump and win. With the majority of primary election voters saying that their top priority in a candidate is their ability to win in the general election, candidates are scrambling to prove that they, in fact, that candidate.

During the debate, the underdogs in this election began making their voices heard in a crowded field. Beginning with Andrew Yang discussing how he values his “outsider status” and proceeding to offer poignant responses to little-discussed issues like paid family leave and a nuanced response to addressing how young boys get pushed into hate groups. Finally, Yang made arguably the most compelling closing statement appealing to other parents who are afraid of the world their kids are growing up in. Moving on to Senator Booker who made quite an impression in discussing black voters and criminal justice reform. He very bluntly talked about how he has been a black voter since he was 18 and

frankly, “black voters are pissed off”. He then moved on to criticize how Vice President Biden has not changed his stance on marijuana legalization and said he thought Biden might “have been high” when he said it. Met with a lot of applause, Booker went on to discuss some of the major downfalls in our criminal justice system especially relating to the war on drugs.

This last debate was one of the most interesting we have yet seen. With the 4 female moderators asking hard-hitting questions and maintaining tight control over the discussion, we heard some of the most substantive arguments since the start of the race. Only time and voters will tell which candidates have been successful in their appeals to the American people.